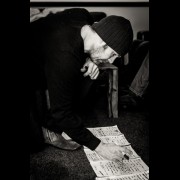 Rhod will be performing some ‘Work in Very Very Early Progress’ Shows over the coming months.

After almost six years away from live stand-up, he is itching to get back on stage. The world has gone totally mad since he last toured in 2012, and his head is all over the shop. It’s time to get back out there and sort it out once and for all.

He hasn’t done a gig for so long, and is claiming to be rustier than a welsh barbecue. Why not go along and see him scrabbling around onstage, trying to find his notes and looking like a total twat (his words).

Confirmed dates on the LIVE page but keep checking back for updates.