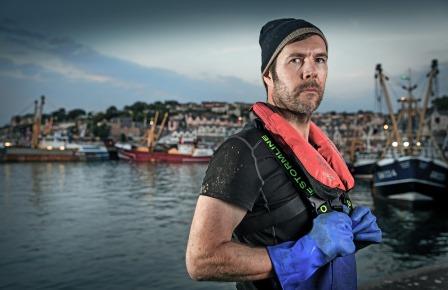 The first episode of the brand new series of Work Experience starts on Wednesday 17th September at 10.35pm on BBC One Wales.

This year Rhod has his limits pushed further than ever as he risks his life attempting one of the most dangerous jobs in Britain as a commercial deep-sea fisherman. He then takes to the skies and is handed the controls of a real RAF Hawk T2 fighter jet.  The adrenaline peaks of the series are balanced out somewhat with Rhod’s other roles; which include caring for sick and injured animals in a South Wales veterinary practice, and taking the reins of a popular seaside hotel as it’s manager.

Rhod says of the new series: “This is series five and we decided to take things up a notch.  Whether i’ve been trying to fly a £15m Hawk fast jet as a fighter pilot, examining dog’s bottoms as a vet, catching real fish as a fisherman, or making toast, folding pillowslips and handing people room keys as a duty manager in a hotel in Tenby…from start to finish this series has been totally adrenaline-fuelled insanity – especially the toast bit.  You’ll be watching from under your bedcovers; there were crumbs everywhere.”

In the first episode of the series, Rhod learns what it takes to work as a deep-sea fisherman in the commercial fishing industry.  After being fast-tracked through an intense safety training course, he heads off to Brixham to embark upon his first 16-hour shift in the open water.

Catch the next instalment on BBC One Wales on Tuesday 23rd September at 10.35pm.  This time Rhod will be getting to grips on the frontline of animal care; from artificial pig insemination to constipated dogs; it’s a dirty job but someone has to do it.

The entire series will air on BBC Two across the UK at a later date.  Watch this space for further transmission news.