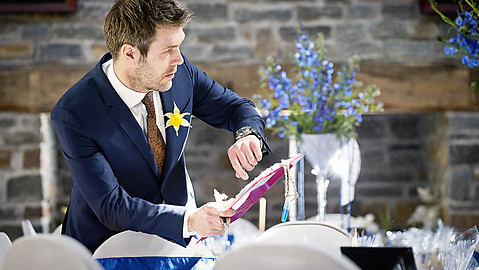 Rhod is back with a fourth series of his critically acclaimed Work Experience series.  The series started on BBC One, Wales on Weds 5th June.  Episodes 2 – 4 will be shown on 12th and 26th June and 3rd July at 10.35pm.

In the first episode, Rhod took on the role of Wedding Planner.  He’d rather spend the weekend trapped in a chemical toilet with a startled horse than spend a single minute thinking about a wedding. So why would a young couple from the Welsh Valleys invite him to organise their Hollywood-themed big day? And what will a surprise-averse bride make of Rhod’s chaotic contributions to cake design, music selection, ice sculpture and celebrity recruitment? Will they still be a happy couple when the dust settles?  Take a look at the first episode here:

In other episodes, Rhod becomes a Tour Guide on a coach trip to Belguim, has some fun around the camp fire as a Scout Leader, and attempts to make it as a Male Model.   Here’s the trailer for the new series:

Watch this space for news on transmission dates across the rest of the UK.