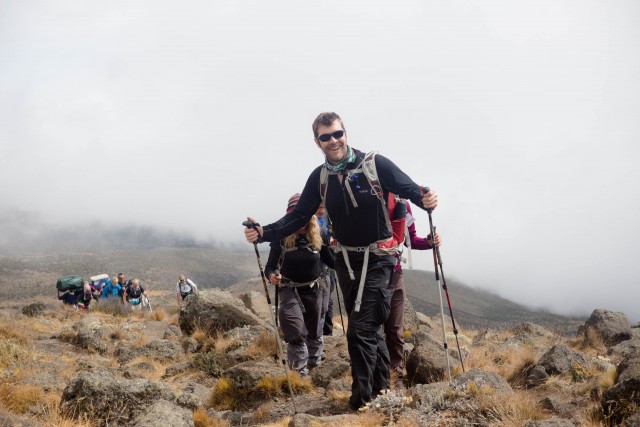 Last year Rhod took on the challenge of climbing to the peak of Africa’s highest mountain; Mount Kilimanjaro. He took no camera crew with him and never intended to broadcast his experience, but as a special one off feature this December, BBC Wales are showing the footage captured by Rhod and his companions during their trek of a lifetime.

Although he’s notoriously averse to strenuous outdoor activity, and with barely any training, Rhod signed up to take part in the charity trek last September alongside 50 other intrepid fundraisers. The BBC Wales documentary follows Rhod and his fellow trekkers ­ including a few famous faces ­ as they battle against some of the toughest and most treacherous climbing conditions in the world.

Together with friends and fellow comedians Barry Castagnola and Clint Edwards, Rhod pushes himself to the limit as he faces six days of altitude sickness, exhaustion, blizzards and sub zero temperatures. The experience was one he will certainly never forget.

“When Velindre Cancer Care asked me to lead a trek to Africa’s highest peak, I assumed they were joking ­ I haven’t exercised properly for over 20 years. I’ve taken a lift to the top floor of John Lewis before, but that doesn’t make me Edmund Hilary. Killimanjaro broke me, snapped me in two, but it was the experience of a lifetime,” Rhod said.

Rhod Gilbert vs Kilimanjaro is produced by Rustle Up Productions and will be broadcast on BBC One Wales on 9th December at 11.05pm.